In the Service of the King 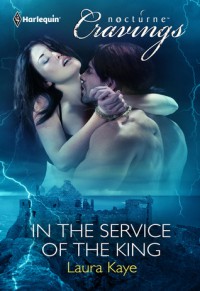 What's this? A vampire resistant to drink from a proffered's vain for fear of finding out she's his mate? A vampire who lost his previous mate and child during a vicious attack on his vampire clan? Sounds like a tortured vampire to me and just the sort of vampire I love.

This was another interesting twist on a vampire story. With vampires needing to drink from a human proffered (a virgin woman around the age of 20) every three months to maintain their immortality. Vampires can determine if they are to be mated with the woman while drinking from her and having sex with her. Vampires, who are all male, seem to look forward to this, but Kael doesn't. He doesn't want to have to worry about losing his mate again. He's spent the past 300 years doing the absolute basics of the proffering ceremony to get by. But the minute he sees Shayla everything changes. He battles himself between wanting to find out more about the alluring woman and sticking with this 300 year old plan.

Shayla has been raised to be a proffered female. She raced through high school and four years of college to ensure that she had everything done before her 20th year. She's loved the idea of Kael, the Vampire King and couldn't wait for her turn in hopes that she would be the one that finally won him over. Things don't go well with Kael and she can't figure out if it's her, being the freaky girl with two different colored eyes who was always picked on or if it was something with him.

Kael needs to let go of the past in order to move on. What bothered me a bit with him was his unwillingness to move forward until he was reminded that his warriors looked up to him. Seems to me, if he was that taken by Shayla, he would have done all of this for her instead of his men. I was also bothered a bit by how easily Shayla forgave Kael, but seeing as she's been in love with her image of him for so long, I could see how she would do that.

Another short read for me, but amazingly written by Laura Kaye (as if she wouldn't) with wonderful characters that I've come to look for in her books. It will have you wishing there were a few hundred more pages by the time you are done!