The Look of Love (Chase & Chloe): The Sullivans 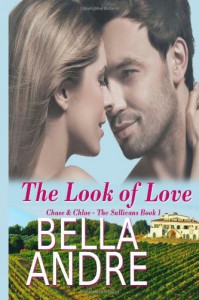 I'd heard a lot about this series and had bought this book a few months ago. Unfortunately, it sat on my Nook app just waiting for me to find the time to read it. After reading it, this is one of those times where I'd like to slap myself for not reading this sooner.


Bella Andre has created a family of wickedly handsome men and gorgeous women in the Sullivan's. This first installment has middle son Chase falling for a woman he finds stranded on the side of the road during a rainstorm in Napa.

Chase, a photographer who has seen and had his share of beautiful woman, instantly falls in love with Chloe. What was refreshing was the fact that he wasn't afraid of his feelings and falling for someone so fast and so hard. Chase was one of those men that mortal women dream about because everything he did centered around Chloe. He was even willing to let Chloe go, knowing it would kill him, in order to ensure that she healed and came back to him.

Chloe is a woman who has been jaded by an abusive ex-husband. She determined to never feel like she needs to depend on another man and to make it on her own. When she meets Chase, she's on the side of the road with a wrecked car and no way to get in touch with anyone to help her. For Chloe, this was the worst possible scenario. To make matters worse, her body and her mind were in a constant struggle with what to do with Chase. She was wildly attracted to him, but her mind was telling her to run as far away as possible. She has a hard time reconciling what she wants now and in the future against what kind of life she had in the past. Until she deals with her past, she's unable to deal with Chase except in bed.

An excellent start to the Sullivan series (there are eight Sullivan kids, so we'll be lucky enough to spend quite a bit of time with this family). This is definitely a book and series you'll want to pick up.